Would you like to switch to the accessible version of this site?

Don't need the accessible version of this site?

Healthy Stress? How to harness stress for good

At first glance, healthy stress may seem like an oxymoron—but it’s true, stress can be healthy for you in certain doses and certain situations. Your body was built to create responses to stress, and this has been one of the keys to survival—but what good can it do for us in modern times? Turns out, more than you may think.

Fight or Flight
Stress can trigger physiological responses and we’re sure you’ve felt them before; increased heartbeat, sweaty palms or brow and quickened breathing are some of the physical reactions humans have to stress. This reaction is an innate response that has been occurring for millions of years. Basically, when the mind perceives a threat or the body experiences a shock, the body releases hormones that boost the ability to either “fight” or flee (“flight”). Most modern humans don’t experience the same hazards our ancestors encountered, but this natural response has now transformed to reactions to modern day stresses—work, deadlines, traffic, illness, arguments, etc.

The Benefits of Stress
We’ve all been told over and over that stress is bad for you - and it certainly can be, especially when it’s chronic - but stress in small to moderate doses can actually have some pretty positive effects.

Think about it: Are you someone who works best under pressure? Need a deadline looming over you to get something done? That’s stress motivating you to get your stuff done!

Stress has also been shown to boost memory and keep your mind sharp, and can drive you to success and achievement. (How did you feel after successfully completing a stressful task? Accomplished? Elated? Would you have felt that way without the stress and that extra push to get it done?)

Also, the feeling that people get when they’re attracted to another - butterflies - is actually a mixture of a bunch of different hormones, brought on by the release of your stress hormone! And even further, some researchers believe that moderate levels or short bursts of stress may help protect you from diseases like Alzheimer’s, by keeping your brain cells working and renewing. 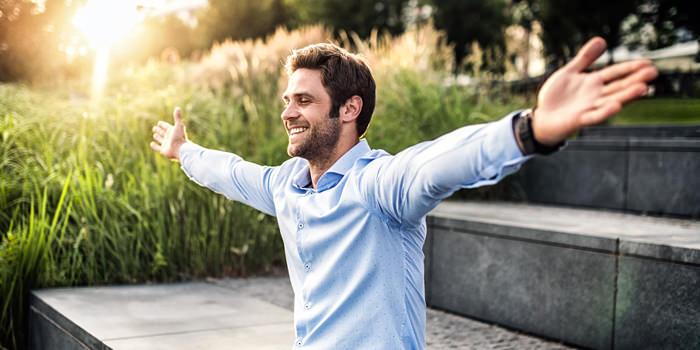 How to Harness Healthy Stress

Change Your Mind About Stress
A fascinating Ted Talk by Kelly McGonigal, How to make stress your friend, touches some really thought-provoking ideas. She presents some stats from a study about stress - in this research, 30,000 Americans were tracked for eight years. First, these participants were asked whether they thought stress was bad for them and then were asked if they experienced a lot of stress. Then, eight years later, the researchers accessed public death records to find which participants in the study had passed away (a bit morbid, we know). It turns out that those who experienced a lot of stress but believed that stress wasn’t bad for them had the lowest risk of dying (even lower than those who said they had very little stress!). This was compared to those who also had a lot of stress but believed stress was bad for them - this group had a 43 percent higher risk of dying.

The implications of that study are pretty incredible; can the long-term, negative effects of stress seen in health issues, like high blood pressure, be mitigated by changing how you view stress? The research is certainly not conclusive and it’s always hard to make such a big switch in how you think, but give this theory a shot. Visualize your stress as something that gives you energy, helps your body, gears you up for action and motivates you. Worth a shot, right?

While our office team is in 5 days a week to assist you, we only schedule appointments during doctor hours